A series of subconscious investigations of place
by Sarah Washington

A project to explore dreams produced as a group in particular and peculiar settings, to ascertain whether any hidden information can be extrapolated about the sites in which the dreaming takes place.

In October 2017 artists, activists, scientists and researchers from the Climate Psychology Alliance were brought together by Cape Farewell to be led in a research method called the Social Dreaming Matrix. After contemplating powerful climate-based artworks we undertook a shared exploration of dreams, aiming to illuminate the cultural unconscious of climate change. The resulting radio work One Thought Fills Immensity which I produced for ORF Kunstradio and the Radia network, explored some of these subliminal themes which may be relevant to humankind in an era of climate change.

This process reset me on an old path. I was reminded of the lucid dreaming experiments I was part of in the mid-1980s, hooked up to an EEG machine throughout the night at St. Thomas’ hospital in London, and the series of biofeedback courses I undertook around the same time with Isabel Maxwell Cade – using another type of EEG brain activity monitor: the Mind Mirror. Significant to me was biofeedback’s ability to produce dream-like states in the waking mind. Coincidentally, in the summer of 2017 I finally brought back to life my old (and as it turned out, hilarious) cassette recordings of these sessions to plunder for a radio show called Mind Mirror – from the mists of time which was part of the Mobile Radio series Render for documenta14, made live at SAVVY gallery in Berlin.

After experiencing the profundity of the Social Dreaming Matrix I kept returning to the thought that it is high time to listen closely to dreams again, to try to uncover what information they are trying to impart, primarily because we need to find radical techniques to confront urgent problems that we are failing to deal with as a species. Perhaps we may be able to discover some useful clues or keys that we have overlooked which will help us to accelerate our development.

Although I am a profuse dreamer, I have only kept dream diaries and records of particular dreams on occasion. This is because it takes too long to write down or record the nightly succession of complicated scenarios, and even to do them justice in words. But there are many mornings when I am sorely reluctant to leave dream-space, as it is so rich and engaging compared with the mundanities of daily life. And it is always trying to suck me back in so that I will linger some more in it’s unlimited playground. Of course there are some disturbing dreams, but these are thankfully rare. As I go about talking to people I discover folklore about dreaming which I didn’t know – like the significance attached in parts of Eastern Europe to the dreams you have in your first night in a new place. According to differing accounts, what you dream will either set the tone for your upcoming stay, or else your dream will be a prophecy that comes true.

The Collective Dreaming project was born on a residency in Prague for the Agosto Foundation from late June to late August 2018. My first task upon arrival was to keep a detailed dream diary. Here is a very brief summary of my first night: “Making a lot of funny music outdoors with a group of wonderful people.”
Which was a perfect mood-setting dream, given that the project involves sleeping in unusual places with an interesting group of people to gather together our dreams. And it also proved to be apt, as the first dreaming sessions unexpectedly occurred outdoors.

I originally planned to carry out the series of dreaming sessions in unusual and historic buildings in Prague, as well as perhaps on the river Vltava or at an ancient monument. However, once the word about the project spread, the first invitations which came to fruition were visits to remote places far out in the countryside of Bohemia.

Our first group dreaming expedition destination was Valeč Castle, which entailed some difficulity to reach: two train rides (one of which was more like a bus and let us out at a house in a field), a walk across country and finally a once-a-day bus (which we were told by a local would likely not come). It was well worth the effort, and the journey was like stepping back in time which added greatly to the sense of adventure. The dreaming group was made up of friends and allies from around the Agosto Foundation, which made it the best possible way to begin the project. A young cat adopted us all upon arrival, and stayed to fully enjoy our company for the entire visit – keeping us entertained by diving in and out of statues and ensuring my feet were kept warm during the night. On this starry night he was nick-named Vega. It was not the most restful sleep for some, as most had not slept out in the open under the stars for quite some time (if at all). The moon was so utterly entrancing that several of us had to keep taking a peek out of our sleeping bags to track its magnificent progress through the trees. This came as a fresh shock to the eyes each time they were opened. And then, undisturbed by wild beasts or roving machete-wielders, we slept and we began to dream. 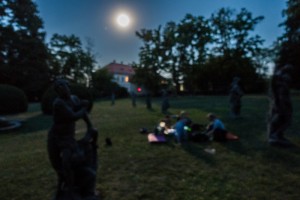 Bedding down in the castle grounds as the statues start to creep around like a cat in the moonlight. 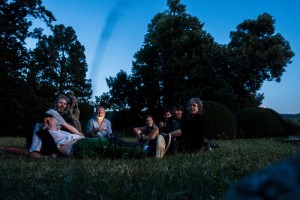 The dreamers of Valeč Castle, passed over at least twice by the International Space Station. 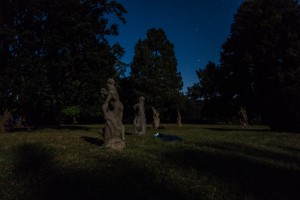