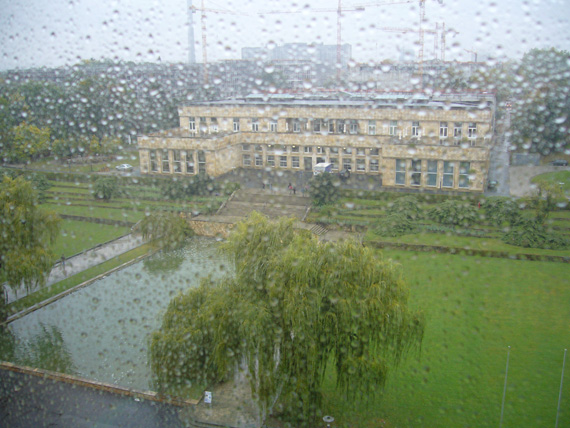 The dining hall of Johann Wolfgang Goethe-Universität. After much debate, the building was reclaimed from its unsavory history 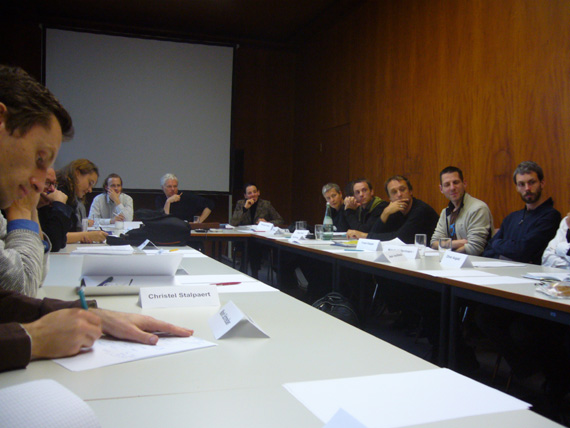 Our workshop group. Unfortunately the discussions didn’t really seem to take off over the three days 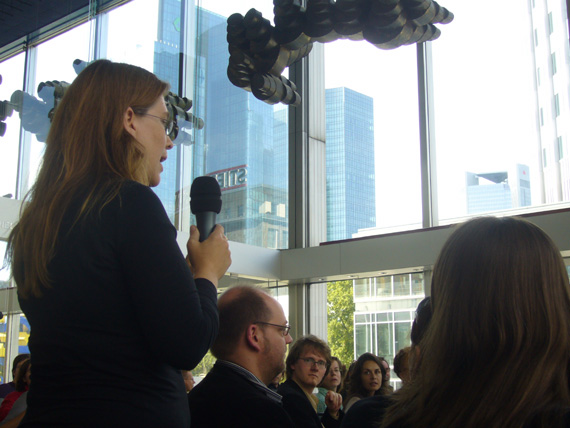 The performances and other events of the conference were interesting. At the closing session Julia Lee Barclay gives her impassioned vision

Back at the Gasometer for the second two concerts of the MONO series. It is sounding different today! 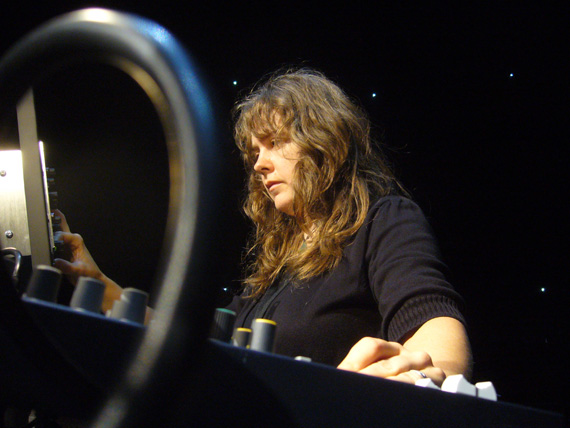 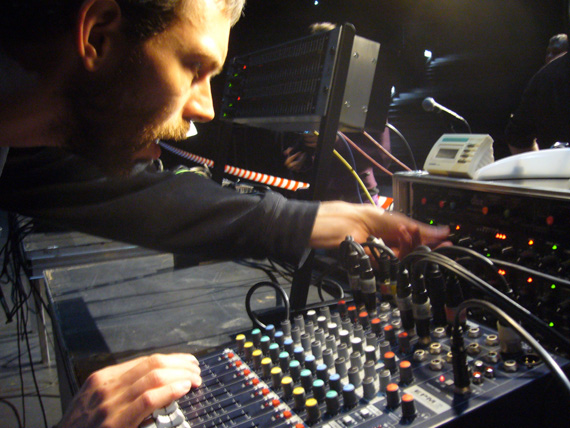 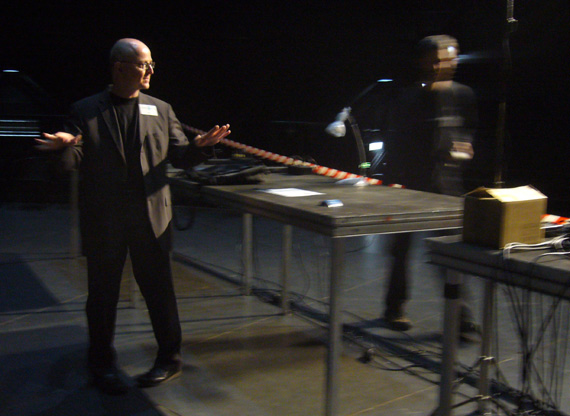 Frank Niehusmann, who did an excellent job of organization as well as impressing us with his moves

We give a series of four concerts which are performances of a work by Knut that was commissioned by Deutsche Gesellschaft für Elektroakustische Musik (DEGEM) for their MONO event. 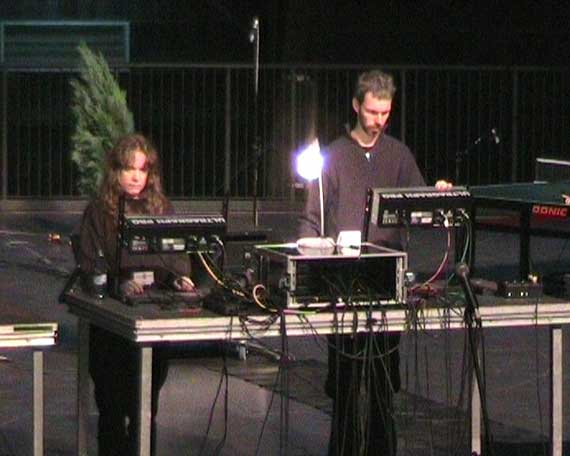 Performing Knut’s feedback piece ‘Resonanz117,5fm’ at the Gasometer. It’s great to be playing there again, especially with this piece which is designed exclusively for the building. Photo by Sven Borzug 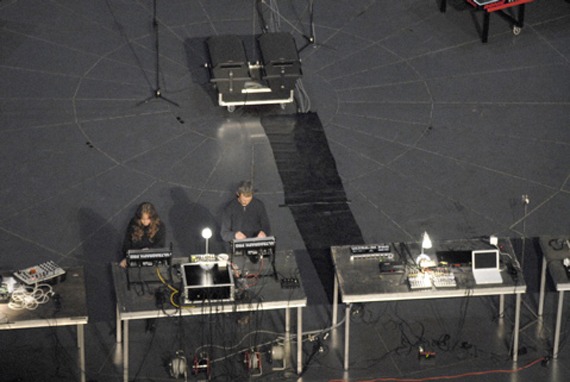 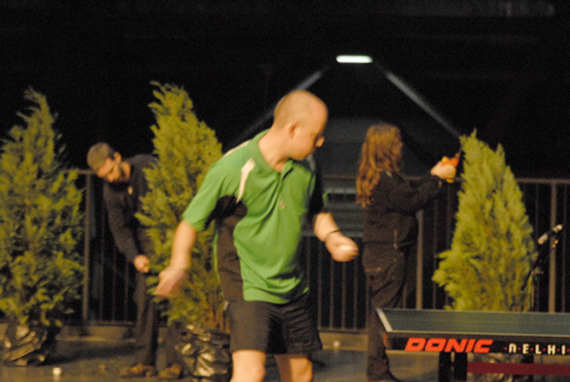 We are invited to perform at an event called Radioexperimente at the wonderful Kunstraum Walcheturm as part of the excellent festival: From Analog to Digital organized by Simon Grab.

We play at midnight, many people who would normally cycle have had to leave to catch trams in the pouring rain. However a decent group of people who came to especially to see us stick it out. It turns out to be a very special concert with a great atmosphere. Thanks to all our Zurich friends

Radio LoRa invited us to take part in their Electromagnetic Summer programme. For four weeks, while the staff take a well-deserved break, they give the station over to artists to perform durational works for radio. We teamed up with another invited artist, Marold Langer-Philippsen, to host a two-week live edition of Clingradio (a multifarious show we previously produced for six hours weekly during the first year of Resonance 104.4fm in London). Clingradio Zürich consisted of three strands: Radioerevan Yurt – an evolving story of the escapades of Marold, Langer and Philippsen involving a trip to Mongolia and plenty of local Zurich colour, The Johnny Head-in-Air show – a dense radio art soundscape punctuated by live happenings from Zurich musicians produced by Sarah Washington, and the Feedback Siesta – a continuous evolving feedback installation by Knut Aufermann which broadcast at lunchtimes and through the nights for a total of 130 hours. All this happened outdoors in a large yard, the Kunsthof – the Yurt was built during the show, the feedback installation and main desk were housed under a tin roof. We were not expecting the mixture of heat-wave and thunderstorms that were to come 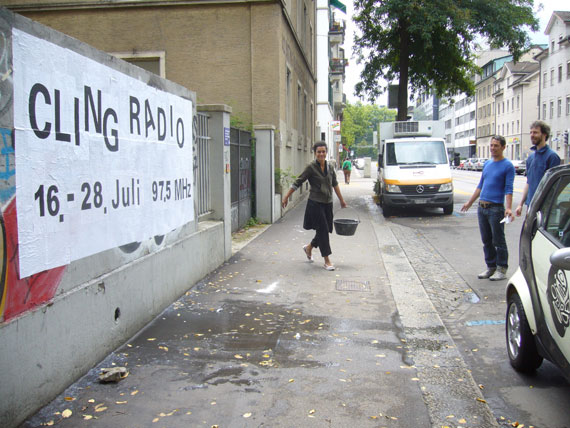 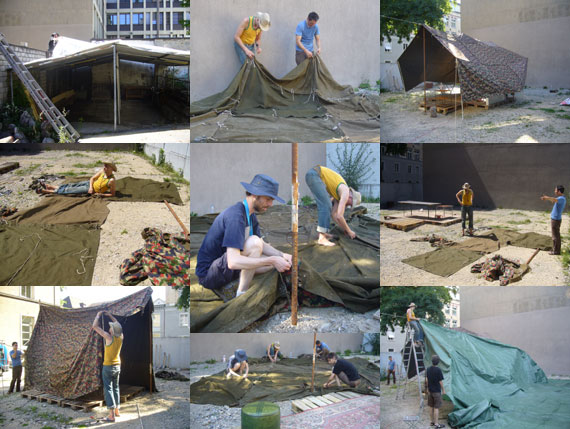 Building the Yurt. This version was not altogether waterproof, so when we heard via the radio that Marold was getting wet, we fixed it around him during his show. There’s not much you can’t do with a bit of gaffer tape 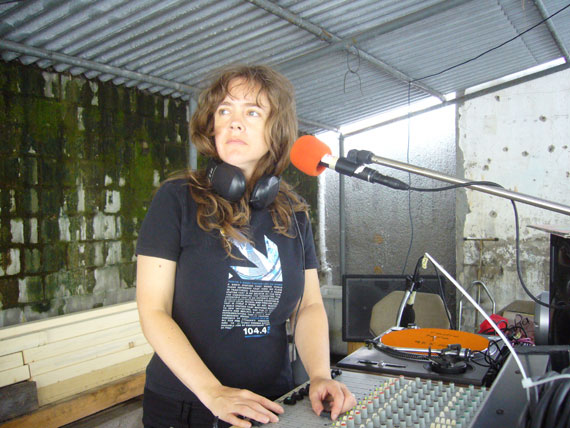 Broadcasting outdoors for two weeks brought plenty of charms, and plenty of heavy rain. The mics captured this beautifully along with the trams, helicopters and dogs in the area 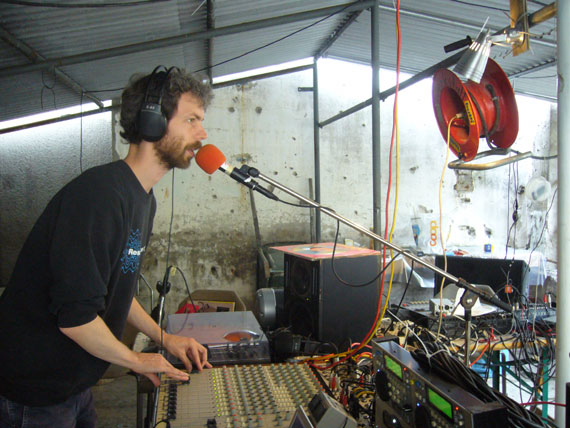 Knut gives explanations of his installation on air, and to passers-by…. 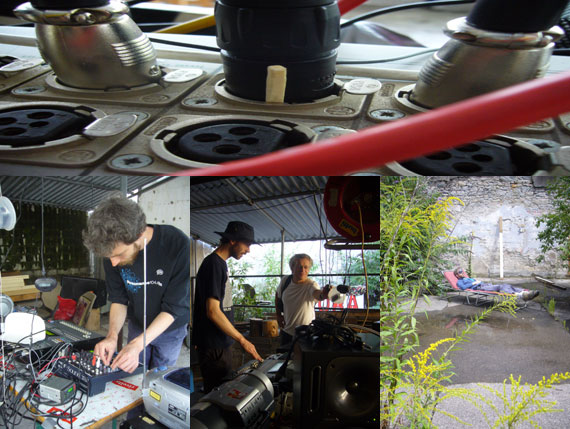 and when he’s done with the Feedback Siesta, it’s time for one of his own 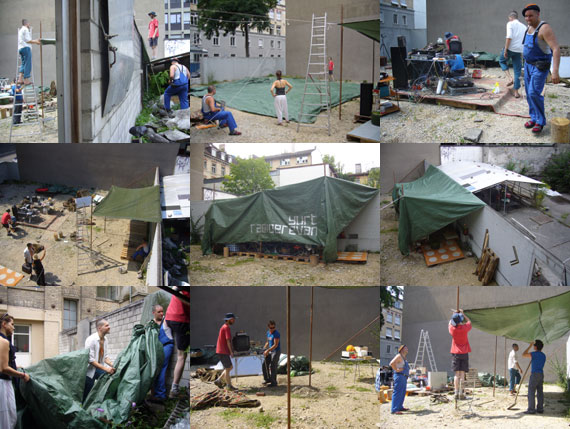 Mischa, Sebastian and others rushed to our rescue as the first Yurt blew over. Yurt two was a more stable home for radioerevan, although it needed regular maintenance during heavy downpours 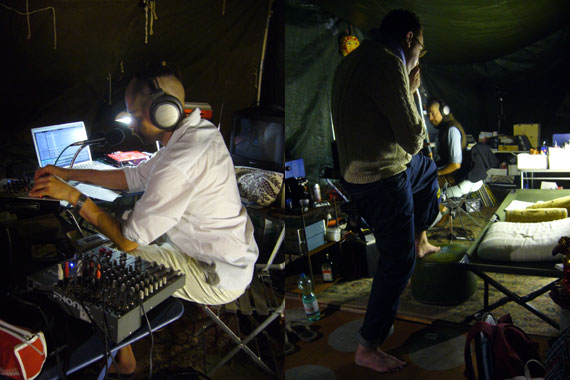 The evenings had a special ambience, Marold would continue to talk on into the small hours and host guests that were drawn to the Yurt 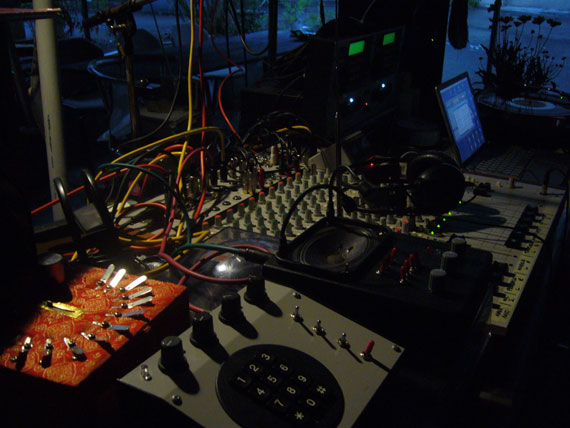 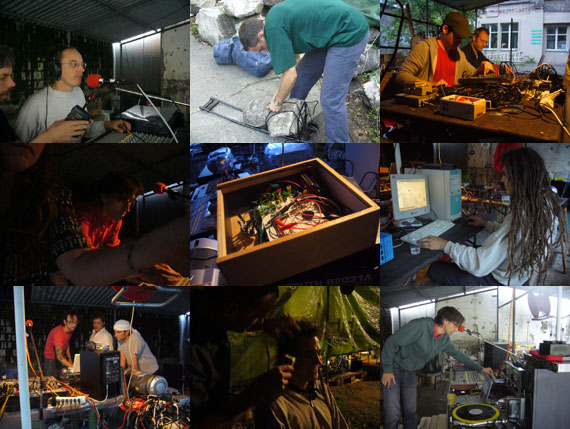 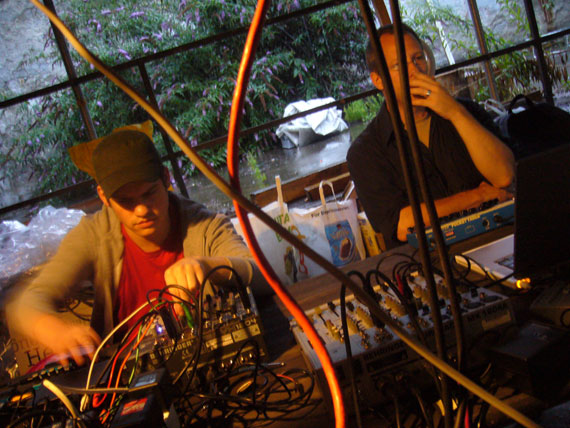 Tomas Korber and Thomas Peter played a set that seemed to guide the rainfall back and forth from soft to strong. When I opened the mic at the end of their set the rain was so loud I couldn’t hear myself speak. It was a remarkable atmosphere 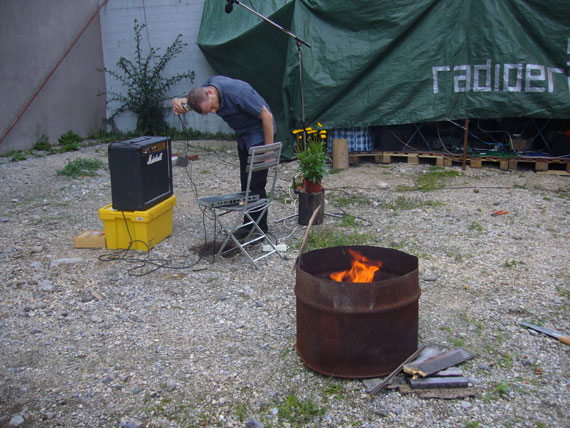 Simon Grab performed one set on contact-miked hair clippers, as he needed a haircut. Later, Urban decided – after much lip-chewing – to use the momentum and surrender his 10-year-old dreadlocks to the (h)airwaves. Simon played a second set on his home-made electronics, inspired by a workshop with Nic Collins 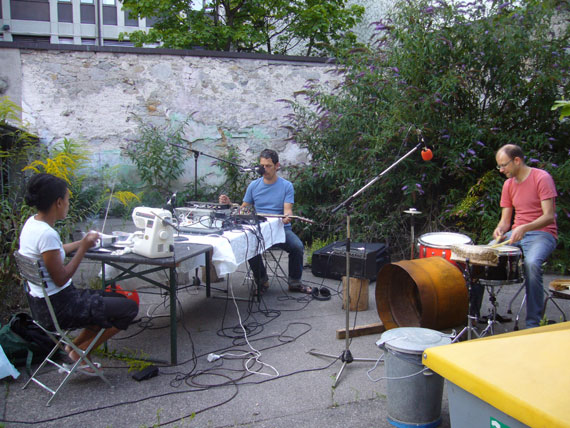 This set from Jörg Köppl, Philipp Schaufelberger (who usually plays guitar), and Mirjam Bürgin was the one that reminded us the most of the old Clingradio days. Jörg was playing voice-activated guitar, Philipp utilized our fire bucket as a kick-drum, and Mirjam used all manner of things to sonify her sewing machine, including bouncing plastic eggs, twigs, coins and polystyrene 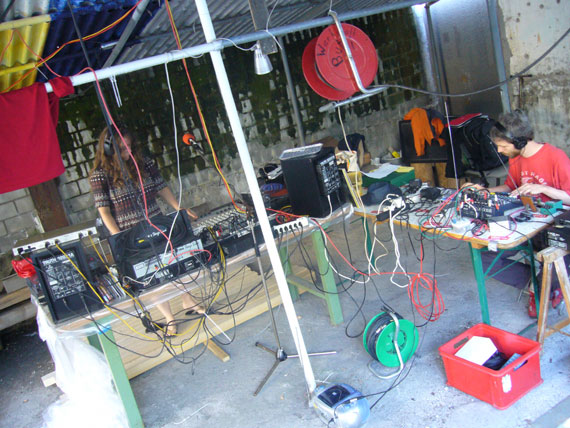 This picture was taken by Evi during our last show – which we all did together. Marold was in the Yurt behind the wall 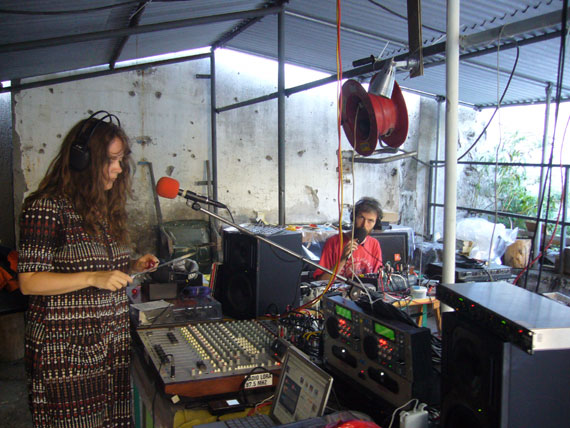 Goodbye Clingradio! Hope we have a chance to resurrect you again sometime. (What is Sarah doing with that big knife? And just where is Johnny Head-in-Air?) 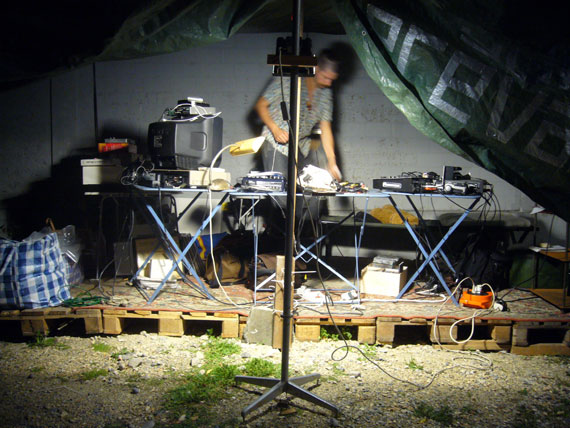 Marold packing down. We had never seen anyone bring so much equipment to a radio project. A jam-packed carload to replace piece by piece… 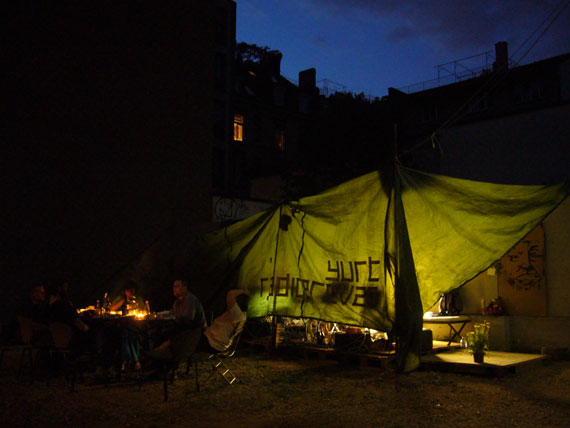 Winding down at the end of two weeks of Clingradio. A fond recollection of a warm night at one of our meals with guests.

Many thanks are due to all who got involved and gave their support, especially Mischa who watched over us and the equipment (and listened to most of the broadcast!), Adriane from Radio LoRa who organized the project, and our curator Jörg Köppl.